During a period from the late 80s and early 90s, AC Milan were not only the best side in Italy but the best in the world. This period still remains the most successful in Milan’s history.

Under the management of two of calcio’s greatest names, Arrigo Saachi and Fabio Capello, and benefiting from the millions of media tycoon Silvio Berlusconi, Milan became almost unstoppable over the late 80s and much of the decade in the 90s. During this golden period from 1988 until 1994 Milan were to win an unbelievable sixteen trophies.

The Scudetto was captured on four occasions with the club winning the Italian Super Cup at the end of each of these campaigns. The European Cup was also won three times during this time with three European Super Cups also being added to the trophy cabinet. Two International Super Cups rounded off a remarkable period for the Rossoneri.

With some of the best names in football at the time such as Van Basten, Gullit and Baresi playing for the San Siro side, Milan of the 90s were without doubt one of the greatest sides the Italian game has ever seen.

By 1987 Milan, who were then managed by former striking legend Niels Liedholm, had not won the Scudetto in almost ten years and it looked like they were a team in transition. The club was struggling on the field as well as off it as the match fixing scandal that saw them demoted at the start of the decade was still taking its toll. However, all of that was to change with the arrival that year of Silvio Berlusconi.

The future Italian prime minister makes the news in Italy these days for all the wrong reasons but back then he was to be the man who would single handedly change the fortunes of the Rossoneri. The media magnate set about ringing in the changes immediately and Liedholm was to leave as Berlusconi brought in Arrigo Saachi to take the reins for the 1987/88 season. It was to prove a masterstroke on his part. 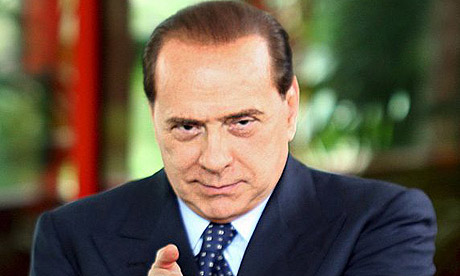 Heading into the new campaign, a Diego Maradona-led Napoli were still the favourites to take the title but the Diavolo blew them away to win the league, losing only two games all season. The biggest result of the season was without doubt the massive 3-2 victory over Napoli at the San Paolo with just three games remaining which was enough to secure the Scudetto despite drawing the final two games.

The title win was to prove huge as it heralded in the era of Berlusconi and paved the way for the dominance that they were to exert over the coming years. The new owner was not slow in splashing the cash in his first season with three players in particular who were bought, Carlo Ancelotti from Roma, Ruud Gullit from PSV Eindhoven and Marco van Basten from Ajax, proving influential in the title win.

The next season, things only got better for Milan who were playing a wonderful style of clinical counterattacking football under Saachi. A third Dutchman was added to the squad in the form of Frank Rijkaard and the midfielder was excellent as he has deployed as a stylish holding midfielder. He was to be the third and final foreign player to enter the side and it seemed that the final piece of the puzzle had been fit for Milan.

That season they were unbeatable in Europe even if their league form suffered as a result. Milan finished the campaign impressively to secure a third place finish but ended well behind eventual champions Inter. Their best form had definitely been saved for Europe though as the Rossoneri were outstanding in winning their first European Cup in twenty years. Milan relied on the outstanding Marco van Basten, who would go on to win the Ballon D’or that year, who fired in an impressive ten goals in Europe which included two in an extremely one sided 4-0 win in the final against Steaua Bucharest.

After destroying Real Madrid 5-0 in the semi final at the Giuseppe Meazza, Milan were equally lethal in the final as Gullit added two more goals in the win in Barcelona. The Nou Camp club themselves were then bested by the Rossoneri in the European Super Cup final before Milan won the Intercontinental title with a 1-0 win thanks to an Alberigo Evani goal against Altetico Nacional of Colombia.

You may have been forgiven for thinking that after such a whirlwind two years, Milan would rest easy on their success. You couldn’t have been more wrong as it seemed the Italians had developed their taste for success and were hungry for more. And more was indeed to follow as season 1989/90 kicked off with four straight Serie A wins. It seemed like it would be business as usual for Saachi’s side but a stuttering run of four games without a win that followed was to cost them the championship in the long run as Napoli won the title by just two points.

However, it would once again be in Europe that Milan were at their most dangerous as they breezed into the European Cup semi finals with ease. Desperate to defend their crown, it took an extra time strike from Stefano Borgonovo away against Bayern Munich to set up a meeting with Benfica in the final. The showpiece lacked the panache with which they had won it the year before but the Rossoneri didn’t mind that as a lone Frank Rijkaard strike in Austria was enough to secure a second successive European Cup win.

As with the previous season, the Super Cup was to follow as Milan beat UEFA Cup winners Sampdoria 3-1 on aggregate in an all-Italian final. At the end of the year, Milan wrapped up another incredible treble with a convincing victory against Olimpia of Paraguay in Tokyo. They were now a truly formidable force and, with European and world dominance well and truly achieved, set their sights back on regaining the Scudetto. The deadly Dutch trio and their teammates were to endure a trophy-less season though as Sampdoria pipped them to the post to win the league title and Marseille eliminated them from Europe at the quarter final stage of the European Cup in controversial circumstances. During the second leg in France, Milan were 2-1 down on aggregate in injury time when the floodlights failed. When they were fixed the away side refused to play the rest of the game and were punished with a 3-0 loss and an early exit by their own high standards.

It was a rare barren spell in such a successful spell for AC Milan. Spurred on for next season by this poor season, Milan’s sights were firmly set on the title and they were not be disappointed. Fabio Capello returned to the bench for the 1991/92 campaign after Arrigo Saachi fell out with star striker van Basten and Berlusconi decided that the irreplaceable Dutchman would be the one to remain as Saachi was shown the door at the Giuseppe Meazza. Berlusconi’s big decision was to prove a very wise call as the phenomenal van Basten hit an astonishing 25 league goals to finish as Capocannoniere for the second time in Serie A and lead Milan to their twelfth Scudetto. The striker’s unbelievable goal tally was not even to be the most remarkable thing about the season as his side romped home to the championship without being beaten once all season and ended it a massive eight points clear of closest challengers Juventus. The Rossoneri were well and truly back and took great pride in regaining the championship. An unbelievable 8-2 win over Foggia away on the final day of the season says it all about that side really.

Even when they win things, they still manage to do it with that almost effortless flair and style that had become a staple of the club’s success over the past few years.

The next season was to continue the excellent vein of form that the Diavolo had shown over the previous seaons as a second Serie A title in as many years was won by four clear points over rivals Inter. Zvonomir Boban and Dejan Savicevic also joined the club that year and were to prove influential over the coming years in Milan. Big wins away to Lazio, Parma and Juventus were to prove vital in determining the destiny of the Scudetto.

The Italian Super Coppa was also won once more with victory over Torino in Washington. Another summer signing, Jean-Pierre Papin ended the season as Milan’s top scorer in the league but it was the sharing of goals all around the team and not relying too much on one player that sealed the Scudetto.

Marco van Basten again won the European Player of the Year award but sadly it was to be his final year with the Rossoneri as the 1-0 Champions League final defeat to Marseille proved to be his final game for the club. Despite trying to return for the next few years, he never managed to overcome his ankle injury and was forced to cut his career short far too soon at the age of just 30. He remains an AC Milan legend to this day by scoring more than 200 goals in just 6 years at the club. 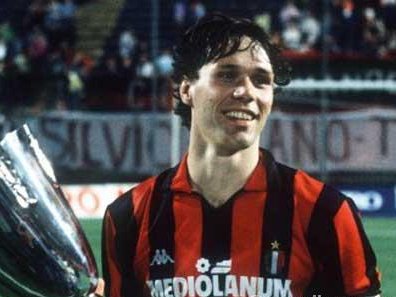 The 1993/94 season was to be the last of continental dominance for Milan in the 90s. A third Scudetto in a row was wrapped up eventually after Milan seemed destined to throw it away by not winning any of the last six games. However, a series of draws helped them to cling on and Juventus ran out of steam by the end and were unable to catch the Rossoneri.

Sampdoria were also beaten in the Italian Super Cup on penalties at the San Siro as Milan won their second trophy of a magnificent season. European success was also to be achieved again as Barcelona were absolutely destroyed by the attacking power and brilliance of Milan in the Champions League final as they won their first title since the competition had changed its name. A wonderful 4-0 win in Athens’ Olympic Stadium (where they were to return so successfully 13 years later) was achieved in an excellent attacking manner as a double from Daniele Massaro and goals from Savicevic and Marcel Desailly, wrapped up a wonderful period in style.

Arsenal were also beaten in the European Super Cup final but Milan could not secure a continental clean sweep this time around as Velez Sarsfield beat them in the final in South America.

The club’s success continued with two more league titles being won before the millennium was out but the sides were not as strong as the ones that went before despite big players like Paolo Maldini, Savicevic, Boban and Demetrio Albertini continuing the great work they had started with the excellent sides they had played in before. The amazing trophy haul over the six or so years at the start of the 90s rightly sees the Rossoneri go down in calcio history as one of the greatest sides ever to grace the game.