The long-awaited 2020 UEFA European Championship, taking place in 2021, will be kicked off by Italy on Friday, June 11 as they take on Turkey in the Stadio Olimpico.

The two teams who contest the first game of the tournament always receive the most intense scrutiny to begin with as the entire continent watches in anticipation, so Roberto Mancini will be hoping his side can put an early marker down with a convincing victory over a very talented Turkey side.

Preparation for Gli Azzurri has been disrupted slightly with Inter midfielder Stefano Sensi suffering a muscle injury that has ruled him out of the tournament. He has been replaced in the squad by Atalanta midfielder Matteo Pessina, who many believe was unlucky to miss out in the first place.

Mancini did spring some minor surprises upon pundits and fans with his squad selection. Whittling the group down from 33 to 26 is not an enviable task.

One of the most notable exclusions was the coach’s namesake, Gianluca Mancini. The Roma centre-back has struggled to impress this season in an inconsistent side, but many still believed he would make the cut given his involvement with the national team before.

Five players who should have been in the Italy squad for Euro 2020, by @VitoCDoria. #Euro2020 #Azzurri https://t.co/pyQcqnaZZp pic.twitter.com/yi2RNZ5vBx

Two forwards that were in with a serious chance of making the cut are Matteo Politano and Moise Kean. The former has performed well for Napoli this season, without quite being on the level of teammates such as Lorenzo Insigne and Dries Mertens. He scored nine Serie A goals and created five more, but it wasn’t enough to convince Mancini.

As for Moise Kean, this tournament likely came a year too soon for him. After his extremely disappointing time with Everton in the Premier League, he has found his feet at Paris Saint-Germain. He’s not a key player for Mauricio Pochettino’s side but he’s certainly started to show why he was so highly rated in the past. He picked up 13 Ligue 1 goals, with another three in the Champions League.

Depending on what happens upon Kean’s return to Everton, expect the 21-year-old to be involved come the Qatar World Cup in 2022. Possibly the most surprising, but definitely the most exciting surprise inclusion in Mancini’s squad is Sassuolo’s Giacomo Raspadori. The 21-year-old striker was playing in the U21 EURO 2020 quarter-final with the Azzurini on the 31st of May, and was then named in the senior squad the next day.

The Neroverdi forward has had a really impressive Serie A campaign, with nine goals and assists from 27 appearances. His inclusion is likely down to the fact that he is relatively unknown outside of Italy, and will be a great option off the bench if the Azzurri are in need of an injection of pace and creativity.

The exclusion of Mancini is likely down to the inclusion of Atalanta defender Rafael Toloi. The 30-year-old has played 30 times in Serie A for La Dea this season, and the coach seems to have favoured his experience over that of the 25-year-old Mancini. That being said, Toloi has only come into the Italy set-up during the last two international breaks, having previously not had Italian citizenship. Many Italian fans were unhappy to see that Juventus forward Federico Bernadeschi had been included in the squad rather than Matteo Politano. The 27-year-old has underwhelmed to say the last for Juve this season, failing to score a single goal.

It’s clear though that Mancini values his versatility across the front line, and generally speaking, his performances are much better for the Azzurri than they are for Juventus. If he fails to make an impact though, Mancini could come under fire for his inclusion.

Italy are in Group A for the tournament, hence why they’re taking part in the opening game. Upon viewing the group which contains Switzerland, Turkey, and Wales, it could easily be seen as a favourable group.

Upon closer inspection though, all three of those teams can be viewed as potential dark horses should their key players find form at the right time. Turkey will likely be the hardest opponent and many predict that Italy and Turkey will be the two teams who progress from Group A.

Turkey’s qualifying campaign was impressive as they narrowly missed out on winning a group that contained World Champions France. They beat the French 2-0 at home and later drew 1-1 at the Stade de France. Wales surprised many at Euro 2016 by reaching the semi-finals against all odds. The current squad is probably on paper more talented than that of 2016. Gareth Bale is of course the headline act for the Welsh, but the likes of Daniel James, Aaron Ramsey, and David Brooks are all very talented.

Switzerland are a side that often appears worthy of the dark horse label coming into major tournaments, but they very rarely live up to it. The most notable players are Atalanta’s Remo Freuler, Premier League duo Xherdan Shaqiri and Granit Xhaka, and a host of Bundesliga players such as Dennis Zakaria, Manuel Akanji, Breel Embolo, and more.

The three teams that Italy are facing have one thing in common that could be a key factor. This graph – created by Rahul Iyer – shows the average minutes played by squad members this season, along with the average age of each squad. 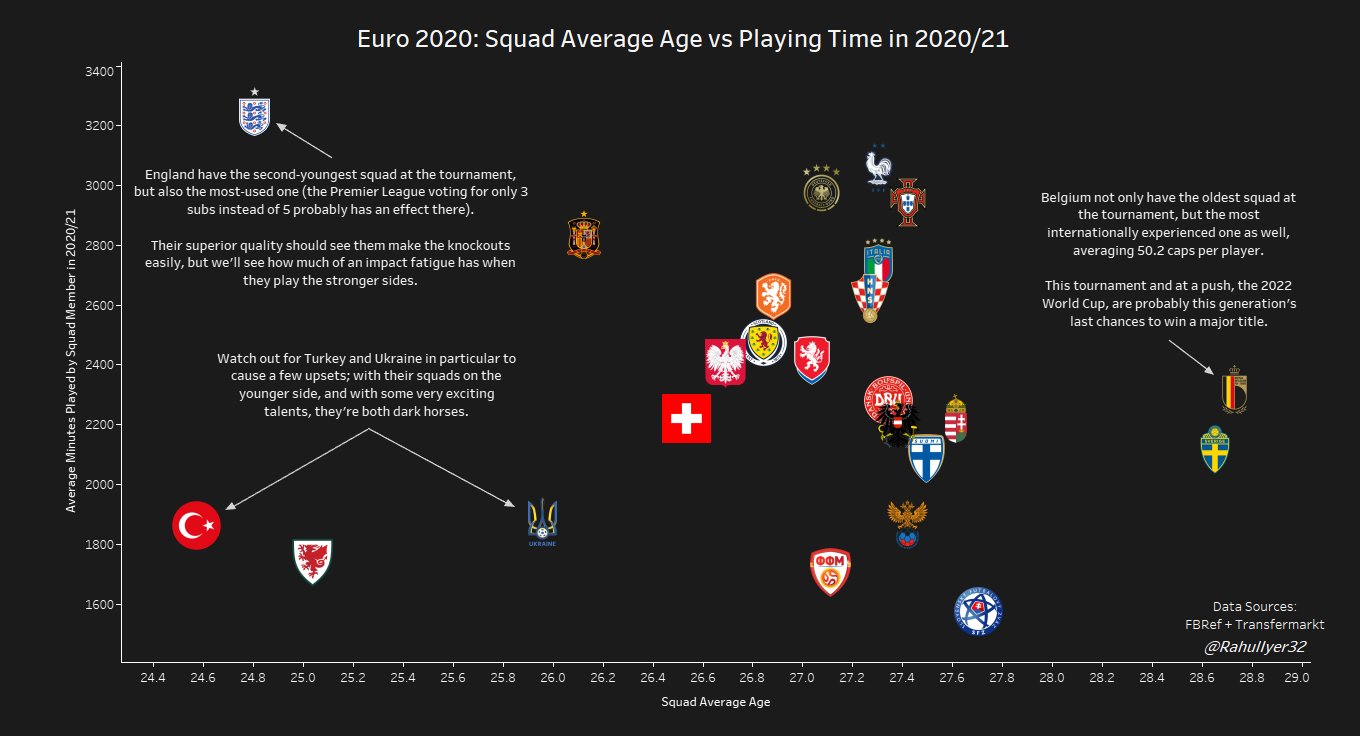 Both Turkey and Wales’ players have not only played significantly fewer minutes this season than Italy’s, but the average age of the squad is much lower too.

Switzerland aren’t quite in the same position of strength as Turkey and Wales, but they’re still in a better position than Italy. It might not be decisive, but it’s expected that squad freshness and injuries could result in some huge surprises at this summer’s tournament. There’s a chance Italy will be on the receiving end of that.

How will Italy fare?

Despite the potential difficulty of the group, Italy definitely should be progressing. They’re capable of beating all three sides but expect there to be a nervy draw or defeat along the way to add some jeopardy. In terms of the tournament tree, if Italy win the group they’ll play the runners-up from Group B which contains Belgium, Russia, Denmark and Finland. Providing Belgium don’t stutter, that’s an ideal pathway.

If they finish second in Group A, they will play the winners of Group C which contains the Netherlands, Ukraine, Austria, and North Macedonia. There’s a clear way for Italy to avoid the likes of France, Spain, Germany, and Portugal until the latter stages, so at least a quarter-final appearance could be on the cards for the Azzuri.