The first match of Euro 2012’s Group C pitches against each other the winners of the last two World Cups. This gives us an idea of the level of the confrontation, and it illustrates why the match is so highly anticipated. There are many obvious commonalities and differences between the two teams, allowing us to project the match in one of several metanarratives.

We can see it as Old versus New, to the extent that Italy are frequently perceived as a waning great power of football, while Spain are the revelation of this new millennium. It could be read as Classic versus Modern, in as much as the consolidated Italian style, based on grit and (allegedly) catenaccio, confronts the nouvelle vague of football introduced by Barcelona and transplanted into the Spanish national team, based on suffocating possession and short passes. It could even be read as the clash for the Mediterranean, bringing together the two greatest powers in the sport whose cultures are based around these warm and ancient waters.

Despite its undeniable richness, however, it would be premature to call this match a classic, and one of the reasons for this is the lack of reciprocity. Matches like Italy – Germany or Brazil – Argentina are characterised by a mutual sentiment, be it of respect, enmity, fear or venom. In the case of Italy – Spain, the oddity of the match which not many seem to be aware of is that the rivalry is (or, until very recent times, was) keenly felt by only one of the two sides. It is the Spanish who consider Italy their bitter and most hated rivals. The Italians, for most of their history, have understood Spain as a genuine competitor, but never as a special antagonist.

The most obvious explanation for this is the discrepancy in their histories. Italy’s most traditional rivals are Germany and Brazil, two nations that brim with World Cup records and among the very few that can threaten Italy’s own international trophy cabinet. When Italy and Brazil met in the 1970 final, they were playing for something even greater than a World Cup trophy – they were competing to be the first team to win a Rimet Cup, the legendary trophy awarded to the first nation capable of winning the World Cup three times. 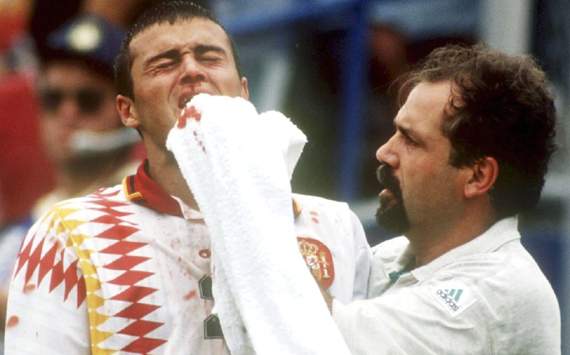 Spain, by contrast, has a very underwhelming World Cup history prior to 2010, never progressing past the quarter-finals. A number of their exits were unfortunate or marred by unsportsmanship by the adversary, not least their 1994 defeat at the hands of Italy.

On that occasion Mauro Tassotti broke the nose of Luis Enrique by intentionally elbowing him in the face. The episode should have been a penalty, but the referee let it slip, and the game finished on a close 2-1 for the Azzurri. With all of these premises, then, it seems predictable that the Spanish would foam at their mouths when crossing the Italians, while the Italians should shrug their shoulders on the same encounter.

Yet there is more behind the Spanish rancour than a simple case of sour grapes over bad referreeing (and rancour it is – as someone who has spent several years of his life in Spain, I can testify that the Spanish press is among the most openly anti-Italian you will ever encounter). At the heart of the matter there is the difference between Italy and Spain in terms of style, a difference which is perhaps irreconcilable and which will inform their game on Sunday.

The Italian game is based on a tension between subtlety and brutishness that is unique to their interpretation of the game. Italians can often be very physical, but their physicality is never simple or self-serving. It underwrites a sequence of gestures and behaviours that are always very hard to decipher. A tackle will only be partly directed towards taking the ball away from the adversary – the rest is psychological play, shutting down the opponents’ nerves along with his legs. Brazilians who face Italian defenders find not so much that they can’t dribble, but that they feel like they can’t dribble.

Similarly when on the attack, Italians tend to employ simple tactical solutions and, traditionally, physical or utilitarian forwards, only to introduce an unexpected creative gesture at some turn which has enough power to instantly disable an opponents’ defence. Contrast this with more choreographic dribblers (notably the South Americans), who increase their technical gesture to heights which cannot be reached and, as significantly, cannot be missed by the onlookers. The best Italians on the offence do not move up – they move sideways.

One of the defining traits of Italian football is precisely their reduction of the game to a primal scenario, a peeling away of the rules and tradition to leave only pure confrontation. It is true that Italians have seldom been interpreters of the beautiful game in the way that certain other nations have been, but this is because to the Italians it is not really a game. The football pitch is only a stage, and the Azzurri play on stage, back-stage, and in all the spaces inbetween. And they’re never scared of getting dirty.

The Spanish, in precise disagreement, are academics. Their understanding of football is reluctant to admit for a Plan B, as though the idea of needing such a thing carried within itself an implicit failure. And the ugliest type of football, to them, is football without a plan, the case in which two teams simply slug it out with little sense of orientation or calibration – the type of scenario in which Italians thrive and often bring out their best.

Spanish football does not conceive of breaking the rules. It cultivates honour (including certain biases which are forms of loyalty and which, to the outsider, may appear dishonourable) and looks down on those who don’t. Their recent success can be explained in terms of having finally found the perfect plan, a football machine that is so well-oiled and so faultless as to be unstoppable even without a Plan B. Previous iterations of La Roja flaked under pressure, simply because pressure was not a factor which can (or, from their point of view, deserves) to be accounted for in the blueprints of how to build a team. This team was so logical, so linear in its execution, that it simply was unable to fall apart, even had it tried. And for the record, the one occasion when it really did try was against the Azzurri, in Euro 2008, when Roberto Donadoni fielded the most dreadful Italian team in decades and the Spaniards still almost managed to lose. In fact, the Euro 2008 match epitomises the ‘rivalry’ between the two teams only because of its aftermath. The Italians shrugged it off as a relatively undramatic defeat that was, with a little hindsight, predictable. The Spanish, having finally vanquished their dragon, went on to win everything that could be won.

The result has been the first paradigm shift in the history of the Italy – Spain rivalry, inasmuch as Italy now feel the pressure too. Going into the game this Sunday, they will be only too well aware that they are faced against the World Champions. And Spain, for the first time, will be aware that they are facing a team just like any other, however strong or weak.

It is a good idea, when considering such aspects of the game, to keep in mind the precedents of the two teams. Italy and Spain have played against each other twenty-five times, with ten draws, eight victories for the Italians, and seven for the Spanish. The data appears rather balanced, until you consider that every single Italian defeat has come in one of their nineteen friendlies. In the actual international tournaments, from the 1934 World Cup onwards, and as soon as the outcome of the game became more than an academic matter, Italy went eight decades undefeated. The watershed was in 2008, and it came on penalties.

The match between these two teams is anomalous because it is based not on a mutualism but on a misunderstanding. The Spanish look at Italians as the dirtiest players in the sport, boring when they play and insulting when they win. In their scorn, they fail to see the many levels of subtlety on which the Italian game is predicated. The Italians have until this day given little weight to the Spanish because the latter seemed concerned with vanities, with notions of an abstract ‘honour’ derived from rules which are no more than words on paper, so distant from the thick reality of the football field, so comical to care about.

On Sunday the teams will walk into the fields in a strange scenario, as the Spanish are more cynical and defensive than usual, and the Italians openly enamoured with the tiki-taka model introduced by Barcelona. Victory may just depend on which of the two sides better understands the other.